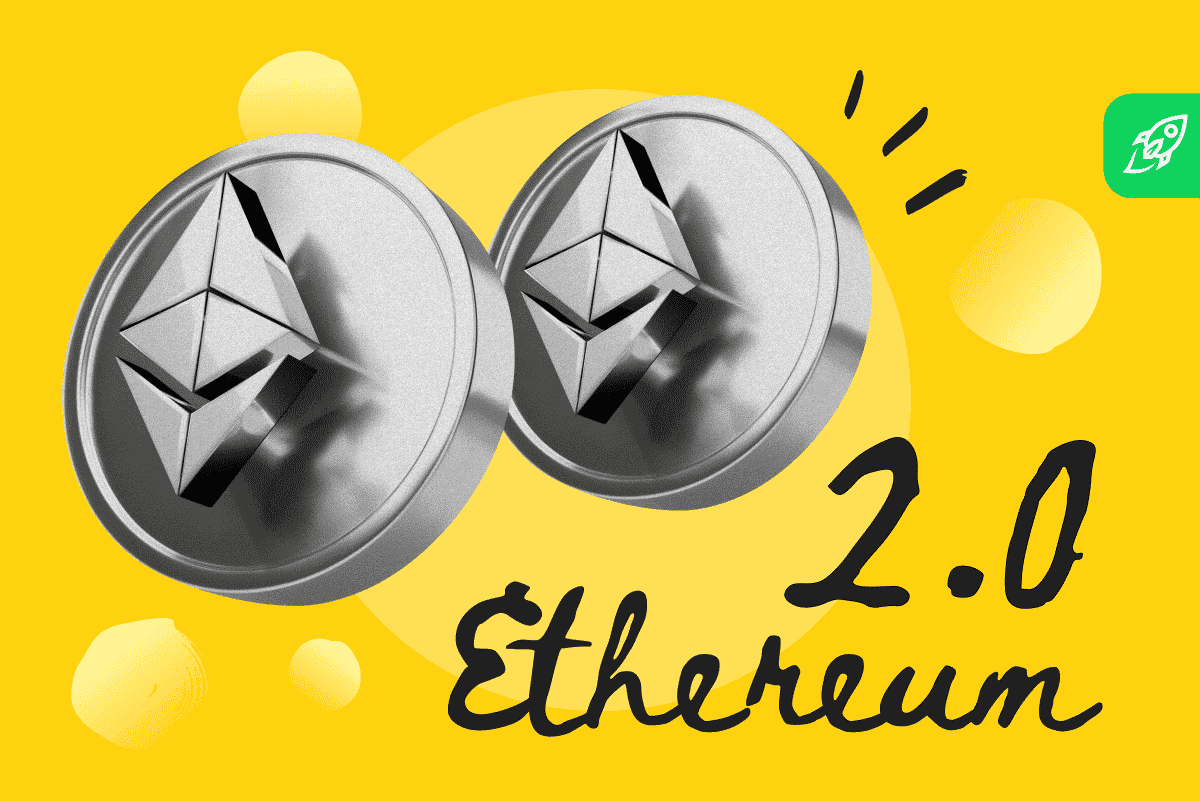 Ethereum 2.0, also known as “The Merge,” is a massive update to the Ethereum network that will change the way that transactions are processed on the blockchain. Recently, the coin’s team decided to forego the “ETH 2.0” title and now simply calls it “Ethereum Upgrades.”

The update is divided into three phases, all of which will bring Ethereum one step closer to becoming a fully efficient, scalable, and sustainable digital asset that can stand the test of time.

The first stage of the upgrades, the Beacon Chain, has already been released, and the second stage, “The Merge,” is currently expected to be launched sometime later in 2022. Let’s take a look at what these updates will change and how they will transform the Ethereum network.

Wanna see more content like this? Subscribe to Changelly’s newsletter to get weekly crypto news round-ups, price predictions, and information on the latest trends directly in your inbox!

Stay on top of crypto trends

What Are Ethereum Upgrades?

Ethereum upgrades are a set of network changes designed to improve its scalability, efficiency, and sustainability. The most notable upgrade is the switch from proof-of-work (PoW) to proof-of-stake (PoS), which may happen in late 2022. This will allow Ethereum to process transactions much faster and cut energy consumption.

In addition to PoS, Ethereum will also be implementing sharding, a way of splitting the network into multiple partitions that can process transactions in parallel. This will further improve the scalability of Ethereum and make it possible for the network to handle millions of transactions per second.

Why Does Ethereum Need an Upgrade?

Blockchain as a technology and the crypto market as a whole are incredibly fast-paced industries that keep seeing innovations being introduced and deployed on pretty much a daily basis. In such a competitive market, one needs to constantly look for ways to improve in order to keep up. Although Ethereum, to a great degree, has been an industry leader for quite a while now, it also needs to adapt to not only keep up but also outpace its competition.

Ethereum’s unique selling point has always been its smart contracts functionality and all the dApps and tokens that can be deployed on its network. However, transactions on the Ethereum blockchain are now — comparatively — slow and expensive. Gas fees keep rising, and transaction speed keeps slowing down.

As a result, the market saw an influx of so-called “Ethereum killers” — for example, Solana. These are blockchain networks that can do the same thing the Ethereum ecosystem does but in a faster and more efficient manner. Although Ethereum’s updates have been planned for a very long time now, they are becoming more and more important with every new project that enters the industry.

Key Features of the New Ethereum

According to the Ethereum Foundation, the new and updated version of the cryptocurrency will have three defining characteristics. Here they are.

If Ethereum wants to keep its status as the best and most popular platform for dApp and token deployment, it needs to be able to handle more transactions per second. Decentralized applications just don’t work that well when you have to wait minutes, if not hours, to carry out a single transaction.

Additionally, scalability upgrades will cut down on transaction costs, making dApps deployed on the Ethereum network cheaper to use.

If Ethereum is ever to become a widespread payment method, it needs to offer enhanced security. Furthermore, it needs to develop upgraded protection solutions as criminals come up with new ways to attack the blockchain and ETH holders.

Sustainability is a huge focus of the upgrade despite not benefitting Ethereum itself directly. The coin’s current proof-of-work model uses a lot of computing power to verify transactions and is incredibly taxing on the environment. It can impede Ether’s chances of becoming mainstream in the future.

Anyone who follows crypto news probably heard of “Ethereum 2.0.” It has been the go-to name for Ethereum upgrades for quite some time, and it’s the name most people recall when they think of the coin’s transition to proof-of-stake. However, the ETH team has recently decided to step away from the name Ethereum 2.0. Now, it is simply called “The Merge.”

Here are some reasons why the coin’s team decided to leave the term “Ethereum 2.0/Eth2” behind.

Some new users thought that “Ethereum 2.0” meant that there would be a new ETH coin, a hard fork like ETC, Ethereum Classic. Of course, that is not the case: the new Ethereum is still the same cryptocurrency — not so much will change for Ether holders. There won’t be any “ETH2” coins or tokens.

This point is somewhat connected to the first one: some fraudulent platforms have already been offering users to help them swap their ETH to ETH2. The number of criminals doing this would increase exponentially if the update actually came out under the name “Ethereum 2.0.”

As both the Ethereum ecosystem and the industry as a whole evolved, so did the planned upgrades. The name “Ethereum 2.0” no longer represents all the changes awaiting the blockchain.

3 Phases of the Ethereum Upgrades

The Ethereum upgrades will happen in three phases: the Beacon Chain, the Merge, and shard chains.

The Beacon Chain is currently separated from the Ethereum Mainnet network. After the Merge, however, they will be, well… merged together into a single proof-of-stake system.

How Does Proof-of-Stake Differ from Proof-of-Work? PoW vs. PoS

Under the current PoW consensus algorithm, miners compete against each other to validate blocks of transactions and are rewarded with ETH for their efforts. This process is heavy on energy and is not very scalable.

PoS, on the other hand, does away with mining altogether. Instead, validators stake their ETH in order to secure the network and are rewarded with transaction fees for their efforts. This process is much more energy-efficient and scalable than PoW.

Both staking and mining serve a similar purpose but do it in two vastly different ways. The former makes the network a lot more secure and significantly more decentralized, which are both really good characteristics for a blockchain to have.

How Will Ethereum 2.0 Affect Mining?

Ethereum mining will likely cease to exist after the Merge. It will instead be replaced by staking.

If you’re currently mining ETH or about to engage in mining, don’t fret: your equipment can still be used to mine other compatible cryptocurrencies.

The Merge is the star of the planned Ethereum upgrades. It is what “Ethereum 2.0” was technically supposed to be — a switch to a proof-of-stake consensus mechanism. At the moment, the Merge roll-out is expected in Q3/4 2022.

Not only will the Merge bring in increased scalability and sustainability, it will also keep all the transaction history and more from the proof-of-work version of the blockchain to ensure the transition is as smooth as possible.

Please note that although the Merge itself will switch the network to PoS, users will have to wait a few weeks (or months) before some additional features will be introduced. For example, we won’t be able to withdraw any staked ETH when the update just rolls out.

Shard chains presently represent the final phase of Ethereum upgrades, but they definitely won’t be the last update the network will receive! Shard chains will massively increase Ethereum’s transaction throughput and data storage space. They are Ethereum’s solution to balancing security and decentralization with scalability; you can read more about them on Vitalik Buterin’s website.

At present, the release of shard chains is expected in 2023.

The Future of Ethereum 2.0. What Will Happen to Ethereum After the Merge?

After the Merge, Ethereum will be a fully scalable and sustainable cryptocurrency that can handle thousands of transactions per second. This will make it possible for Ethereum to become the world’s first decentralized supercomputer and, potentially, a widely accessible payment method. The Merge will also open up a new profit-earning opportunity for Ethereum holders: staking.

Only time will tell what will happen to Ethereum after all the planned updates roll out. After all, crypto is not an easily predictable industry. However, Ethereum has a lot going for it: its smart contract functionality, well-established reputation, the status of the second most popular coin, and more.

One thing’s for sure, however: the Merge will significantly improve the Ethereum ecosystem for both users and developers. We are definitely looking forward to it!

No, Eth2 is an update that will make Ethereum a proof-of-stake blockchain. However, it will still be the same coin — Ether.

When is the Ethereum 2.0 release?

No, Ethereum 2.0 is just an update to the original Ether.

Is Ethereum 2.0 coming out?

How will ETH 2.0 affect Ethereum’s price?

It’s hard to predict how Ethereum’s price will be affected by the switch to PoS, but it will definitely cause some price movement. Usually, cryptocurrencies experience a rally after similarly significant updates.

When will I be able to sell Ethereum 2.0?

ETH2 is not a separate coin, so you don’t need to worry about being able to buy or sell it. There will be no new Ethereums released. You can buy and sell ETH on Changelly. YFII Is Now Available on Changelly