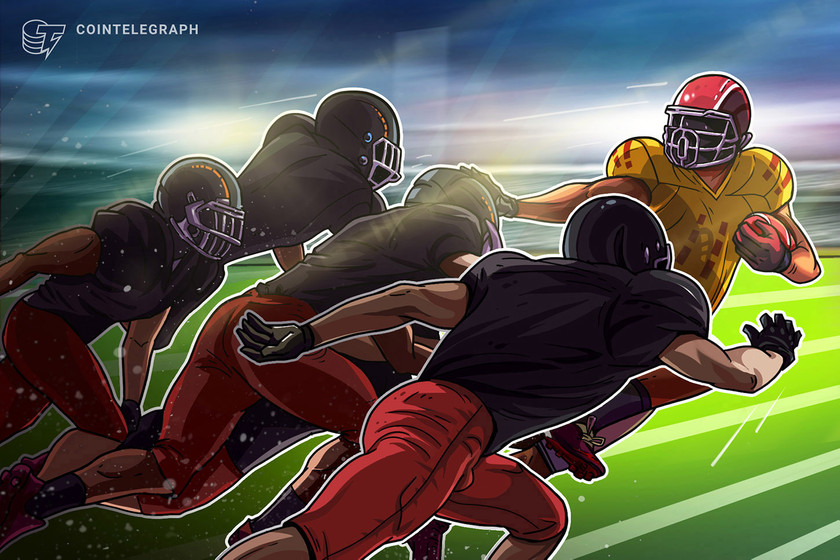 Dapper Labs, the creators of NBA Top Shot and top crypto derivatives exchange FTX are both turning to the National Football League as part of their expansion initiatives.

Dapper Labs is reportedly working on an NFL collectibles marketplace, while FTX has signed an endorsement deal with star running back Aaron Jones of the Green Bay Packers.

Dapper’s latest move comes one week after the firm teased — as part of its latest $250 million funding round announcement — that it would venture beyond its basketball-based NFT project NBA Top Shot and expand into other sporting codes and areas of entertainment.

According to Sports Business Journal sources, the new NFL marketplace is expected to launch before the 2022 season begins in January. The NFL and the NFL Players Association (NFLPA) will acquire an equity stake in Dapper as part of the deal.

The platform is set to follow the model of Top Shot, which tokenizes NBA basketball highlights and sells them to users as collectibles on its marketplace. While details are sparse, the sources told the publication that deal makes Dapper the NFLPA’s second-largest source of digital licensing revenue — second only to the “Madden” video game series from EA Sports.

The new deal may be related to the NFL’s reported decision at the start of this month to bar all teams from the sponsorship deals with crypto trading firms or NFTs until the league established a strategy “for sports digital trading cards and art.”

The NFL has many crypto-friendly players such as Tom Brady who launched the Autograph NFT marketplace earlier this year, Trevor Lawrence who inked an endorsement deal with Blockfolio and Saquon Barkley who converts his endorsement money into BTC via Strike.

Jones will be paid in crypto for his promotional work and will also integrate FTX Pay into the website of his youth outreach charity dubbed “A&A All the Way.”

The star running back and his free-agent brother Alvin have purchased an equity stake in FTX via their investment firm Showtyme Ventures, LLC.

I’M IN! Excited to join @ftx_app as an investor and ambassador!

The best and safest way to buy, sell and trade crypto #ToTheMoon pic.twitter.com/mVmpwr4Nyk

The deal is the latest in a long line of sporting promotions and endorsements FTX has undertaken, suggesting the exchange sees sports fans as a fast route to mainstream adoption.

The firm has naming rights deals with Miami Heat’s home stadium, the University of California’s Cal Memorial Stadium along with a sponsorship deal with Major League Baseball.

The FTX branding will be featured prominently on the racing team’s cars and drivers, along with the team’s fleet of trucks, in the garages, and in trackside hospitality and communications facilities. FTX branding featured at the Russian Grand Prix on September 26.

As part of the deal, FTX also gains access to work with star drivers from Mercedes such as Lewis Hamilton and Valtteri Bottas, and the firm has also teased that NFT collectibles will be rolled out at a later date.

Congrats to @LewisHamilton on his historic 100th win!

What a way to start our partnership! pic.twitter.com/nIBrlxwjFF

Cointelegraph has reached out to FTX regarding its sports-related partnership strategy.