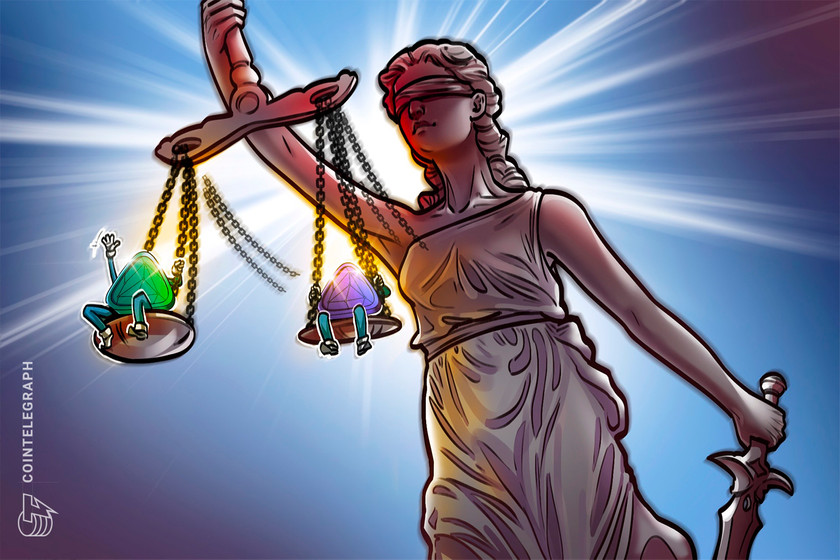 Law firms Holland & Knight and Bluestone have served a defendant in a hacking case with a temporary restraining order through a nonfungible token, marking the first known legal process to be facilitated by an NFT.

The so-called “service token” or “service NFT” was served to an unnamed defendant in a hacking case involving LCX, a Liechtenstein-based cryptocurrency exchange that was hacked in January for almost $8 million. As Cointelegraph reported at the time, the attack compromised the platform’s hot wallets, resulting in the loss of Ether (ETH), USD Coin (USDC) and other cryptocurrencies.

Holland & Knight has become the first law firm to serve a defendant by #NFT, which was created and airdropped by our #AssetRecovery Team. Learn more from our client @LCX. https://t.co/wWs2cOVVY1 #crypto #blockchain #legalinnovation pic.twitter.com/mo7VaAKEgo

LCX reported on June 7 that approximately 60% of the stolen funds are now frozen with investigations currently underway in Liechtenstein, Ireland, Spain and the United States. Approximately $1.3 million in USDC was frozen by Centre Consortium, an organization founded by USDC issuer Circle and crypto exchange Coinbase, based on a court order from the New York Supreme Court.

LCX said the funds were laundered via crypto mixer Tornado Cash but were later traced through “algorithmic forensic analysis.” The analysis also allowed the company to identify wallets associated with the hacker.

You’ve been served! #subpoena
About 1 hour ago, @LCX‘s lawyers served a “Service NFT” to a subject address. Approx. 1.3M $USDC frozen on chain.

Additional details and statement by LCX will be published within 24h.

In light of these findings, Holland & Knight and Bluestone, the law firms representing LCX, served the anonymous defendant with a temporary restraining order that was issued on-chain using an NFT. This method “was approved by the New York Supreme Court and is an example of how innovation can provide legitimacy and transparency to a market that some believe is ungovernable,” LCX said.