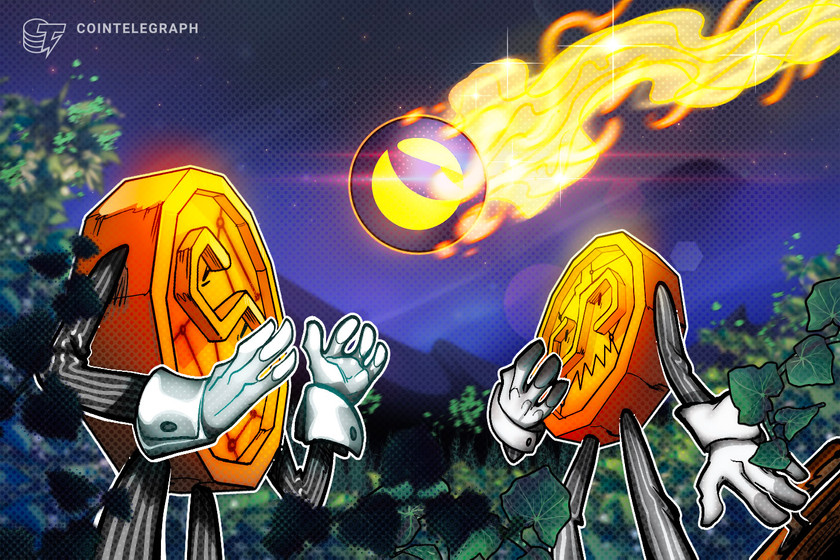 Stablecoins were supposed to be the boring uncle of the crypto world — safe, sensible and dull. They’re probably not what Satoshi Nakamoto had in mind, but they’re supposed to be a reassuring haven of calm and utility away from the turbulence of pure-play cryptocurrencies.

With values pegged to fiat currencies, stablecoins were intended to be useful rather than to offer get-rich-quick schemes. They play an important role in the cryptocurrency ecosystem by providing a safer place to store capital without having to cash out entirely, and allowing assets to be denominated in fiat currencies rather than volatile tokens.

However, events in May demonstrated that crypto stability is still elusive. With governments slow to react, Terra’s LUNA token — which has since been renamed Luna Classic (LUNC) — dropped to close to zero in value, wiping out $60 billion along the way. The obvious conclusion would be that the stablecoin experiment has failed. But I believe Terra’s fall to Earth is the precursor to a new era where stablecoins will become established, accepted and beneficial components of the global economic system. And the regulation that is only now dropping into place already looks well past its sell-by date.

Not all stablecoins were born equal

If that seems unlikely right now, the failure of a few stablecoins does not write off the entire concept. Other stablecoins have been constructed on solid ground and are performing as expected.

What’s happening is a clearout of the algorithmic stablecoins. These are coins that were never fit for purpose because they were built on insecure foundations. There were always critics: Some called out Terra as a Ponzi scheme and argued that it, and other algorithmics, would only hold value if more and more people bought them.

Algorithmic stablecoins are unregulated and not backed by equivalent amounts of the underlying fiat currency — or by anything, for that matter. Instead, they deploy smart contracts to create or destroy the available supply of tokens to adjust the price. It’s a system that worked, backed up by an artificially high interest-paying mechanism called Anchor, while enough people believed in it. Once that trust started to evaporate in early May, the flood gates opened in a classic, old-world bank run.

Related: What can other algorithmic stablecoins learn from Terra’s crash?

But there are other classes of stablecoin that are backed by assets, including fiat currencies. Tether (USDT), the world’s biggest stablecoin by market capitalization, has published its asset register to demonstrate that its token is fully backed by assets held in a reserve. Tether’s value against the dollar has remained consistent, including through the current turmoil, with only a relatively minor blip on May 12 when it declined in value to $0.97.

2/ The USDC reserve is held entirely in cash and short-dated U.S. government obligations, consisting of U.S. Treasuries with maturities of 3 months or less

USDC has performed even better than Tether at its primary task: tracking the U.S. dollar.

Regulators were slow to react…

Regulators were stepping up their focus on stablecoins before the Terra meltdown, though perhaps a little late, given what has happened. In the United States, President Joe Biden signed his Executive Order on Ensuring Responsible Development of Digital Assets on March 9 — to an unexpected chorus of approval from the broader crypto industry.

In early April, the United Kingdom announced its intentions to regulate as-of-yet-unspecified stablecoins. The same month, a leading member of the U.S. Senate Banking Committee, Senator Patrick Toomey, introduced the “Stablecoin Transparency of Reserves and Uniform Safe Transactions Act of 2022,” dubbed the Stablecoin TRUST Act for short, addressing cryptocurrencies whose prices are pegged to the U.S. dollar or other assets.

Ironically, in an interview with the Financial Times published on May 6, as Terra began its descent toward zero value, Senator Toomey called on regulators to do more to regulate stablecoins “before some bad thing happens.” However, even he seems not to have predicted how quickly things were going to unfold:

“He pushed back against some of the stricter measures being promoted by Democrats, who believe stablecoins are now worth so much money that their operators should be regulated like banks.”

Since then, things have started to move more quickly. Once the Terra route began, from about May 5, regulators quickly stepped up their level of vigilance. In a report issued on May 9, the U.S. Federal Reserve said stablecoins were “vulnerable to runs” and lacked transparency about their assets. And Treasury Secretary Janet Yellen recently commented on the urgent need for guardrails, saying it would be “highly appropriate” for lawmakers to enact legislation as soon as this year.

Related: The United States turns its attention to stablecoin regulation

Elsewhere, in June, Japan became one of the first countries — and by far the largest economy — to regulate a form of non-fiat digital money when its parliament approved the regulation of yen-linked stablecoins. This was not Terra-collapse related but based on a regime first proposed by Japan’s Financial Services Agency in March 2021. The new law guarantees face-value redemption, restricts stablecoin creation to regulated institutions, and requires stricter Anti-Money Laundering measures.

…and are missing the point

Despite these warnings and emerging policy steps, what seems to be missing is a clear distinction between algorithmic and asset-backed stablecoins. In my view, asset-backed fiat stablecoins should be regulated by governments and have capital adequacy rules and restrictions on what can be done with reserves.

Algo stablecoins, if they survive as a class, should come with extensive health warnings about the risks that remain on consumers’ shoulders. Algos are the latest in a long line of innovations — the next won’t be long in coming, and regulators won’t be ready for it either. The reality is that people need to take care of their own assets and wealth. Any fully decentralized environment always requires that people protect their own assets closely and with vigilance.

And compounding the sense that reality is outstripping regulators’ ability to keep up, the existence of fully backed coins, such as USDC, seems to remove any need for the U.S. government to develop its own central bank digital currency, or what some call the “digital dollar.”

Darkest before the dawn

At the time of writing, we are only a few weeks past the Terra collapse. As a result, stablecoins are under a cloud, and the long-term impact on the broader ecosystem of blockchain tokens, which remain under pressure since prices peaked in September 2021, is still unclear.

Many commentators are reveling in the crypto gloom, stoking the latent skepticism many people feel about the entire crypto project unleashed by Satoshi Nakamoto.

In my opinion, as far as stablecoins are concerned, it’s a case of being “darkest before the dawn.” Most people did not — and still do not — understand that all stablecoins were not born equal. Algorithmic stablecoins, as is now obvious, were a disaster waiting to happen. Fully backed stablecoins — ideally within the regulatory environment being planned or adopted in the U.S., U.K. and Japan, among others — are a perfectly sensible option with important roles to play in the hybrid crypto-fiat economies of the future. Their time has come.

This article does not contain investment advice or recommendations. Every investment and trading move involves risk, and readers should conduct their own research when making a decision.

The views, thoughts and opinions expressed here are the author’s alone and do not necessarily reflect or represent the views and opinions of Cointelegraph.

Uldis Tēraudkalns is the CEO of NexPay, a Lithuanian fintech startup providing banking infrastructure for the digital assets industry. Uldis has more than a decade of experience working in finance and managing venture investments, and has served on the boards of different companies. Uldis holds a master’s degree in finance from the Stockholm School of Economics and is a co-host of The Pursuit of Scrappiness, a leading business and startup podcast in the Baltics.